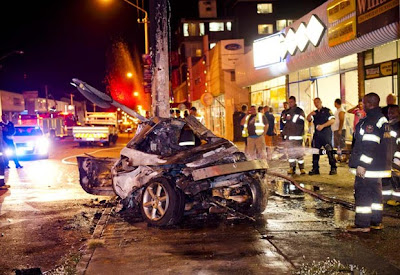 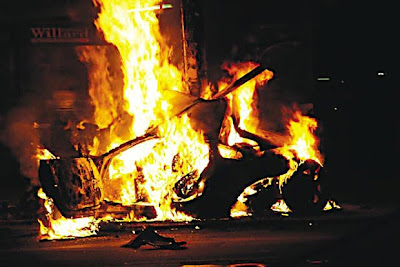 In South Africa, drag racing (street racing) consists of a chosen road, a bunch of egotistical men and fast, extremely loud cars. The fact that the chosen road is a public road being used illegally has no impact on the mass ‘racers’ or the mass of people viewing it. The thrill heightens as the two cars pull up to the starting line and off they go…  the thrill, the intensity, the screams … BOMB … 3 people DEAD! Was it all worth it?

NHRA describes LEGAL drag racing as “an acceleration contest, on a track, or drag strip, that begins from a standing start between two vehicles over a measured distance. A drag racing event is a series of such two-vehicle, tournament-style eliminations. The losing racer in each contest is eliminated, and the winning racers progress until one remains.”

Note the phrase “track, or drag strip”, this clearly implies a dedicated road! My brother as a teen would constantly badger my father to take him to a street car race. The answer was always “no, it’s too dangerous”. After the scene on Sunday (03/04/2011) I can promise you not another word will come out of his mouth regarding ‘drag racing’!

Both cars on Sunday spun out of control resulting in the Nissan 350Z exploding when it collided with a lamp pole and the Fiat Uno Turbo collided with a pole on the opposite side of the road. Not an image to take lightly at all.

Voortrekker road in Pretoria is a well known stretch overpopulated with big-headed, illegal drag racers! I read that the community has constantly informed the authorities and they get nowhere!  I hope the authorities feel the guilt as now we have 3 deaths and a crowd in much need of counselling. Law enforcement needs to take a good look at their job description…

The authorities cannot be blamed entirely as the drivers thrive off the cheering crowds that gather at these illegal events. Take away the crowds and the illegal drag racers may stop. By becoming part of the crowd you are encouraging an illegal action! The drag racers are lucky the cars didn’t take out any innocent people in the crowd! It has happened in the past. Honestly if you want to put yourself in that position, you are asking for trouble…

My father described the incident on Sunday as “reckless with untrained lunatics trying to be racing drivers ploughing into people.” That is exactly what it is! If the drivers were ‘out of this world’ drivers, they would be racing in legal drag races against real drag drivers. Who wants to go watch a second rate drag racer anyways?

Three more lives were needlessly lost during an illegal drag race in Pretoria in 2011 and it still continues.

Illegal street racing on Voortrekker Street in Pretoria has over the past decade or more, become a customary Sunday evening’s entertainment for thousands of spectators who line the street exposing themselves to the danger of illegal racers losing control of their vehicles.

The AA cannot condone this very dangerous practice and calls on the authorities to take immediate action to prevent further injury or death due to illegal street racing.

Despite the authorities being well aware of the problem and the danger to public safety which this activity poses, very little action has been taken to counter this in the past.

“Now that there have been fatalities, we will no doubt see strict law enforcement in the area particularly on Sunday evenings. Surely a case of closing the stable door after the horse has bolted”, said Gary Ronald, Head of Public Affairs at the Automobile Association.

“What makes this crash significant is that in the year in which the UN Decade of Action for Road Safety is being launched, a public safety issue that the City Fathers are all too aware of, has been allowed to go unchecked and in the main, not policed. Illegal street racing locations and events are well known to police, yet it is allowed to continue. Why?” he continued.

“Perhaps it is time that specific legislation relating to illegal street racing – and road rage for that matter – is drafted with appropriate sanction as these serious offences are not described adequately in the National Road Traffic Act”, he added.

Drag racing venues such as Tarlton and The Rock Raceway have scheduled racing events which cater for street racers in a controlled and safe environment conducive to safe competition.