This EXPO was held at the South African Air Force Museum. It was a time of hope and great excitement for people often neglected – the thousands and thousands of people who are survivors of crashes, who possibly woke up, after being unconscious, to hear that they have become quadriplegics or paraplegics as a direct result of a crash.

Some people have suffered other serious health set-backs, such as stroke victims, frequently  due to high stress levels.

SAIDI Instructors, under the guidance of Caroline Rule and Justine Kolling, of Rolling Rehab, evaluate their driving, in order to establish if it is necessary to re-do their driving licences, or to start learning to drive, where appropriate.

In many cases there is every chance of driving normally again, but not all. In some cases adaptations to the vehicle will be required, but after undergoing a course of driving lessons, and passing a re-test, they may be issued with a new driving licence, with restrictions. The excitement they experience is a huge source of satisfaction to the team.

Some people have suffered terrible injuries due to physical and mental violence inflicted on them by others.

Some were born with congenital defects. In many cases, these applicants have a very positive outlook, having learnt to live with their own disabilities for a lifetime, and to compensate for them. We have seen a young man, who was born without arms, passing his driving licence – first time – after just 14 hours of driver training, having never driven before! He has bought himself a lovely new car and amazes everyone with his capabilities.

Put yourself in their situation. Can you think what it means to people who cannot earn a living, who are confined to a wheelchair, dependent on others for their survival? Depression, fear and insecurity could rule, but “Wow!” – Can they teach us all a thing or two!

The majority of these clients are such cheerful, sweet-natured people, very appreciative of any training they receive and prepared to work hard to improve their circumstances. They need their licences very badly. 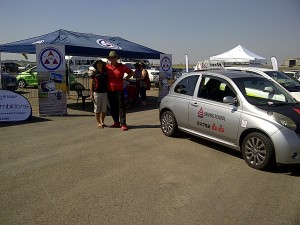 As a secondary bonus, while helping them, we hear what caused their injuries, and learn from their bad experiences too, bringing even more defensive driving skills to all our clients. This is a win-win situation!

SAIDI instructors were kept very busy at the EXPO taking one person after another for a drive (in an enclosed area), testing to see if each candidate can possibly become safe drivers and be re-tested after suffering injuries which left them either quadriplegics or paraplegics; or in some cases, after experiencing traumatic brain injuries due to strokes and other serious illnesses.

In other cases our previous clients popped in to prove that they have passed their driving licences legally, (despite being born with congenital defects, such as spina bifida and even being born without arms), came to show the visitors to the show that they passed their driving licences legally – and we were there to cheer them on with great satisfaction!

WELL DONE CAROLINE RULE AND JUSTINE KOLLING AND ALL OUR CLIENTS WITH DISABILITIES! You are doing a marvelous job! 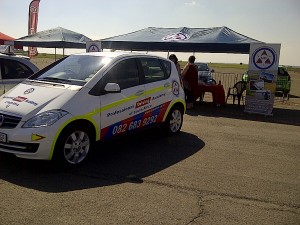 Pat Allen – National President of SAIDI – Parked in front of the lovely new SAIDI Banners and gazebo which afforded very welcome shade on the hot tarmac as we trained one person after another, together with some non-SAIDI members. Pat also works with “Driving Ambitions” and “Rolling Rehab” clients, enjoying training them very much.